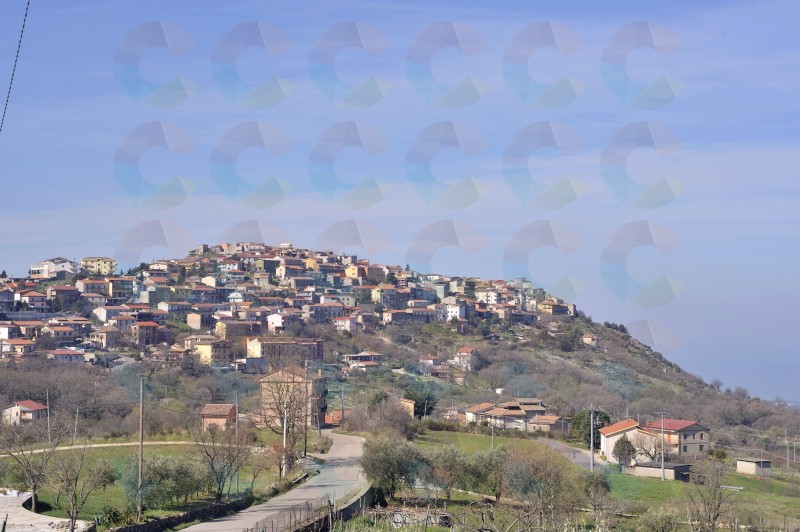 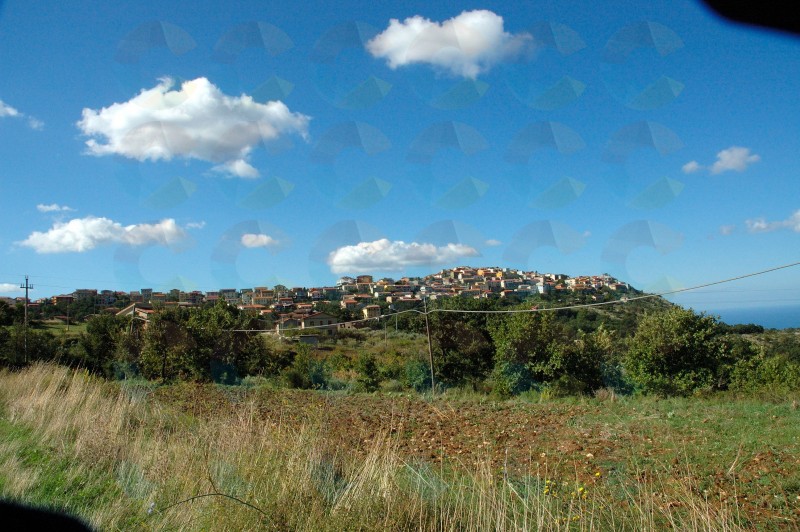 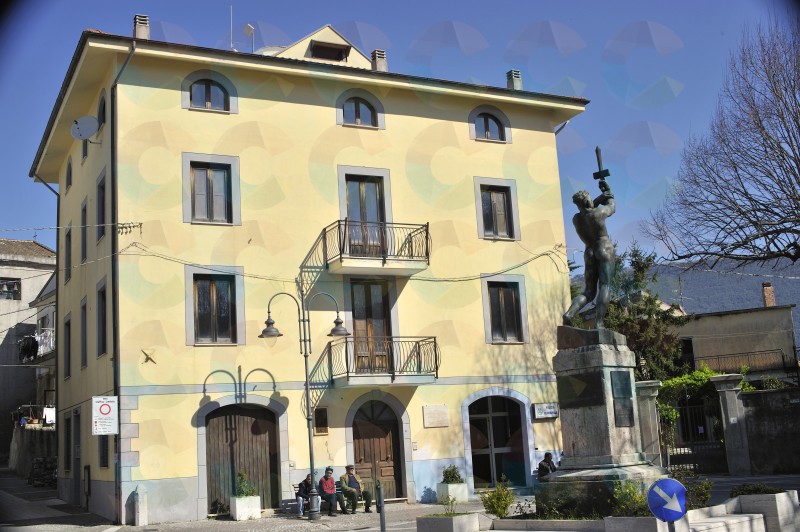 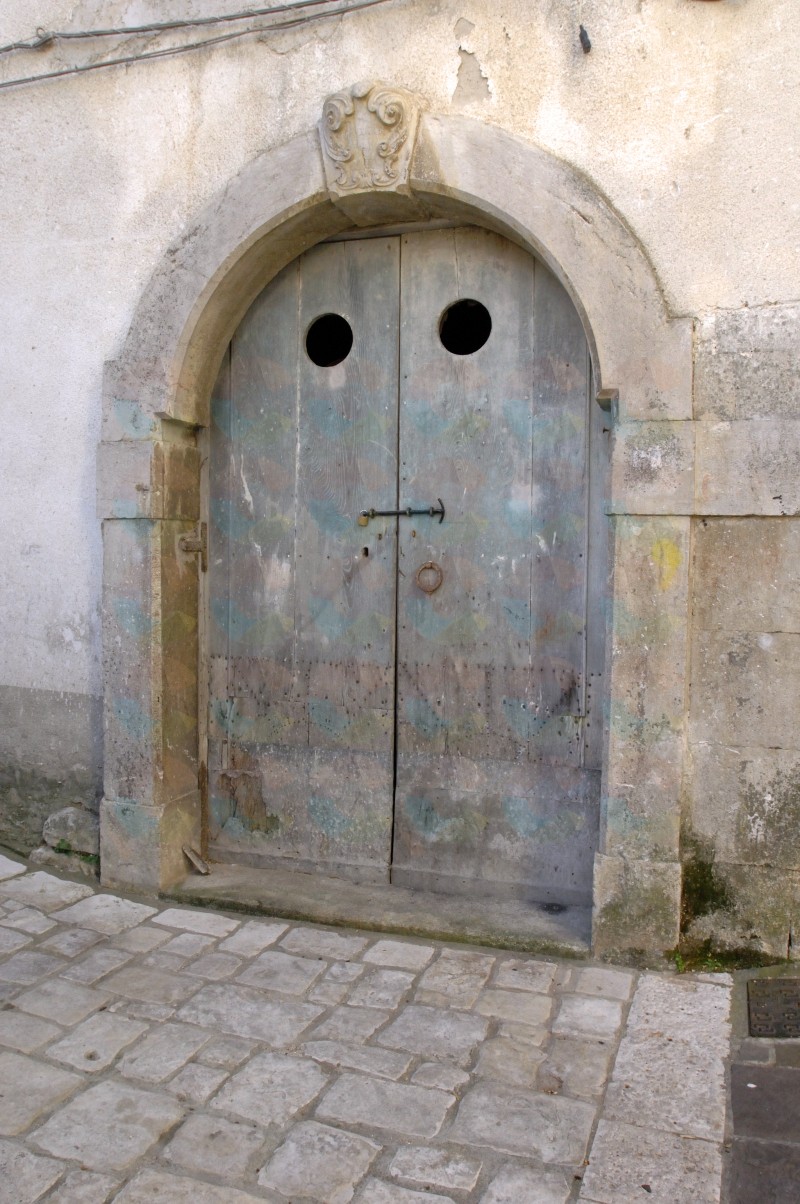 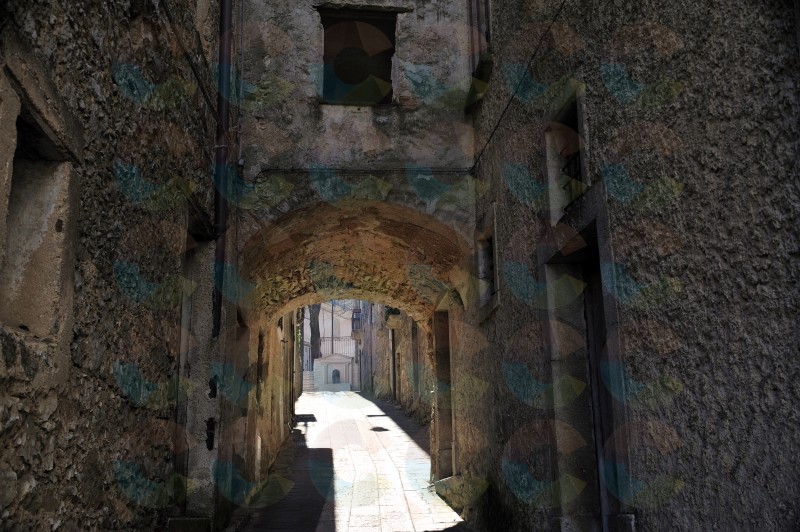 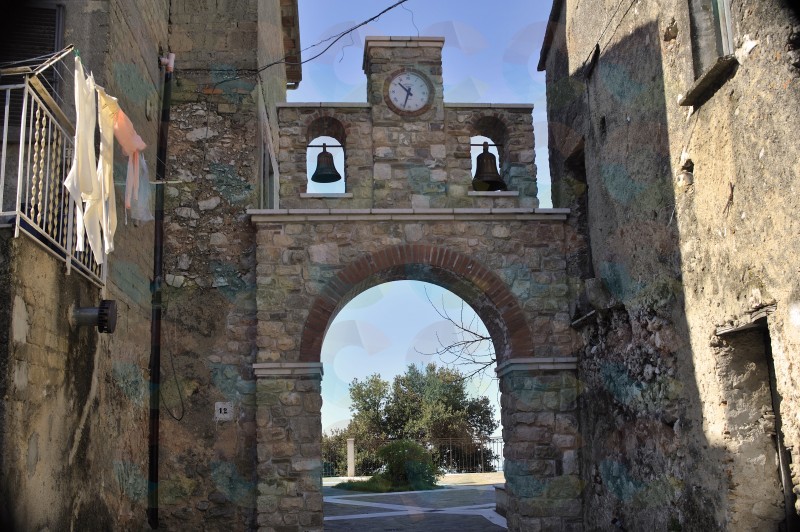 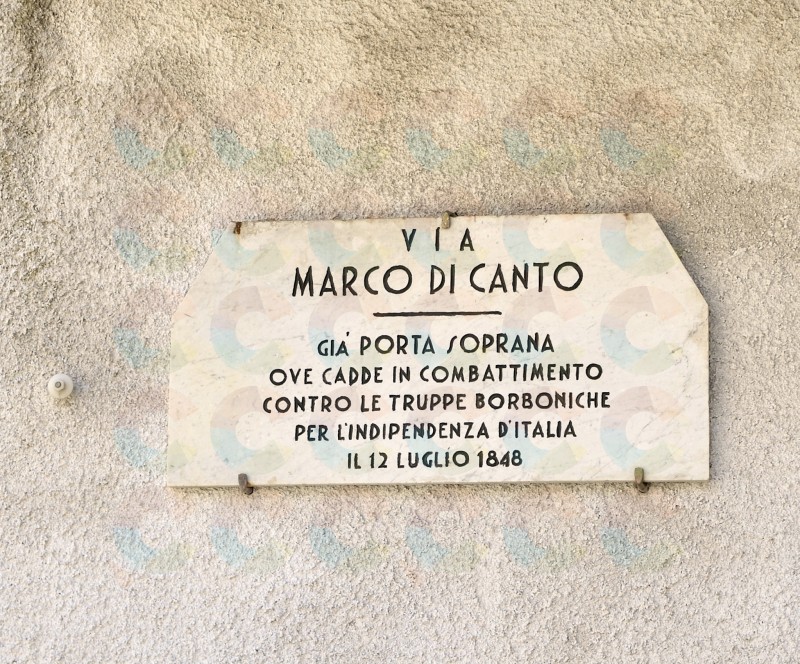 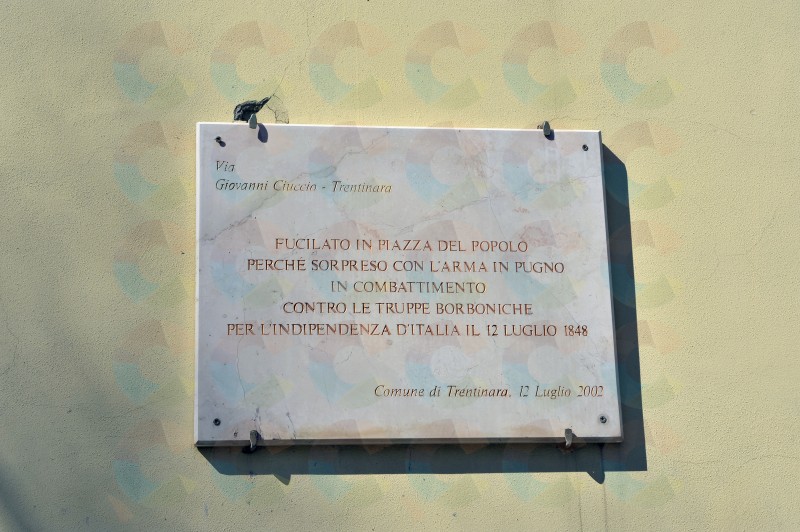 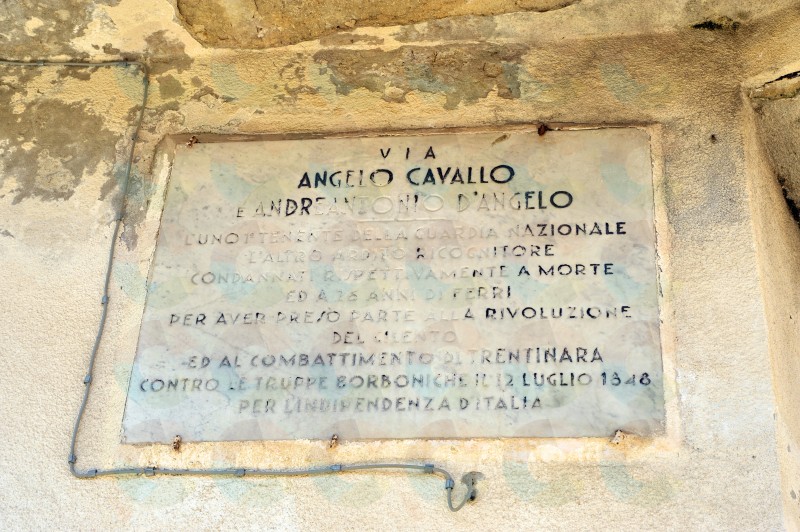 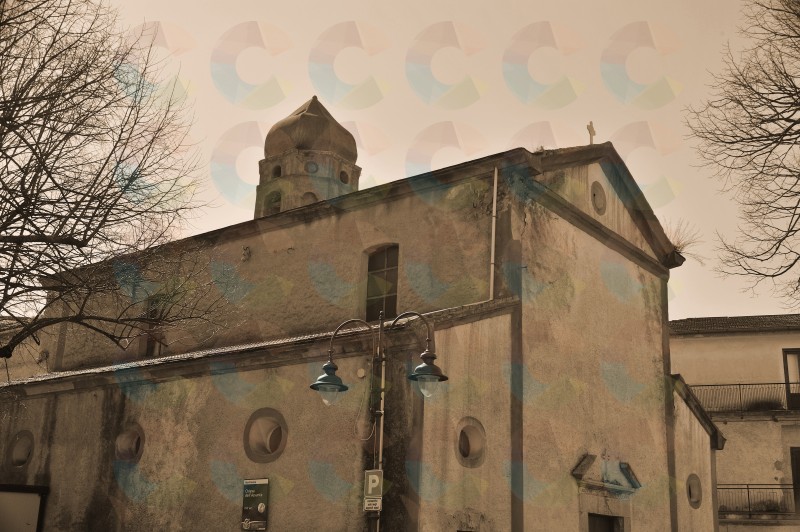 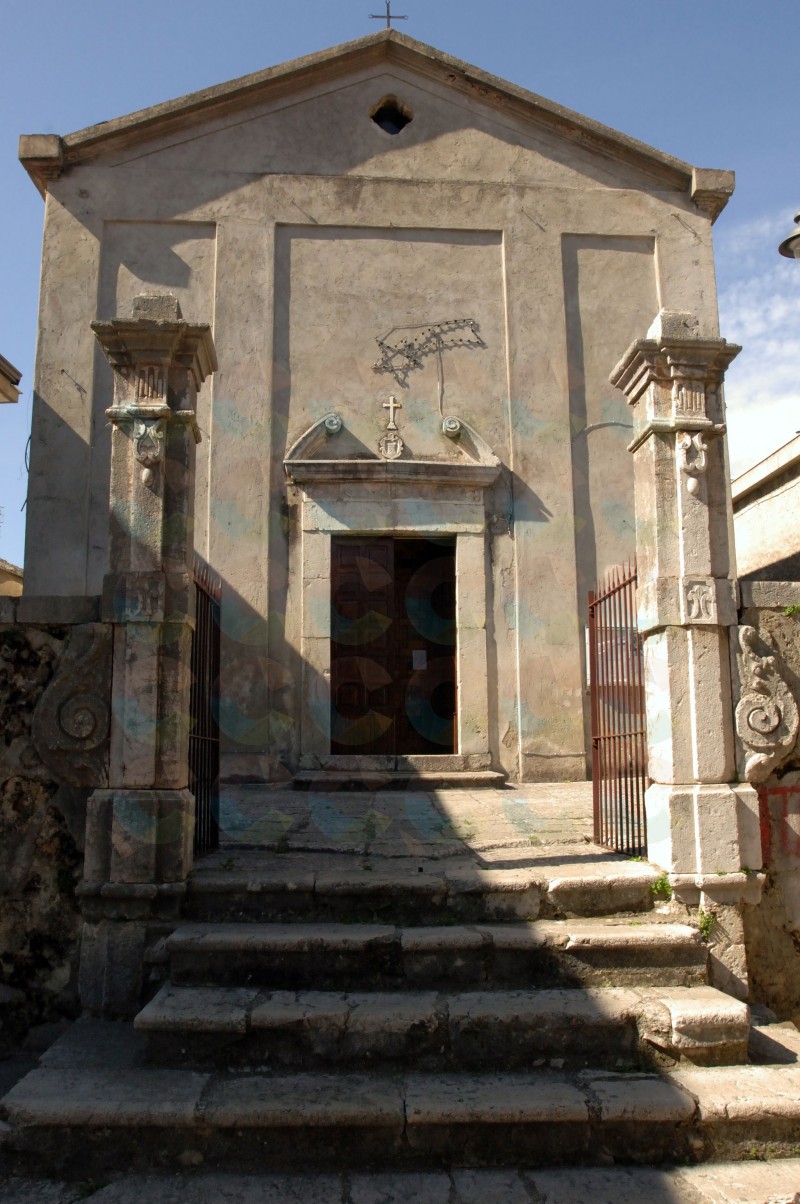 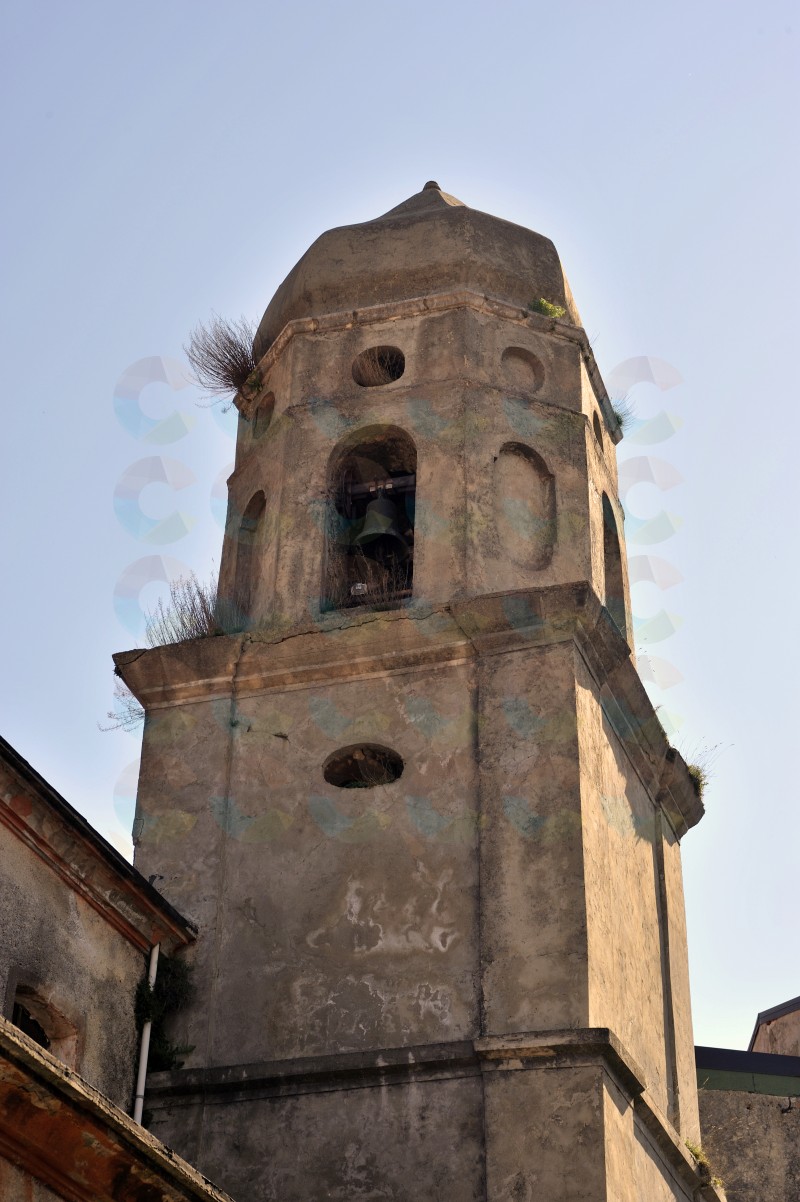 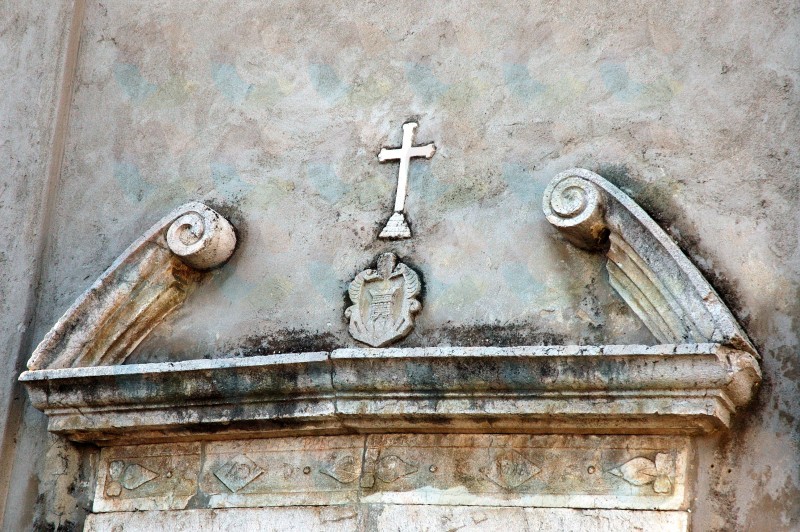 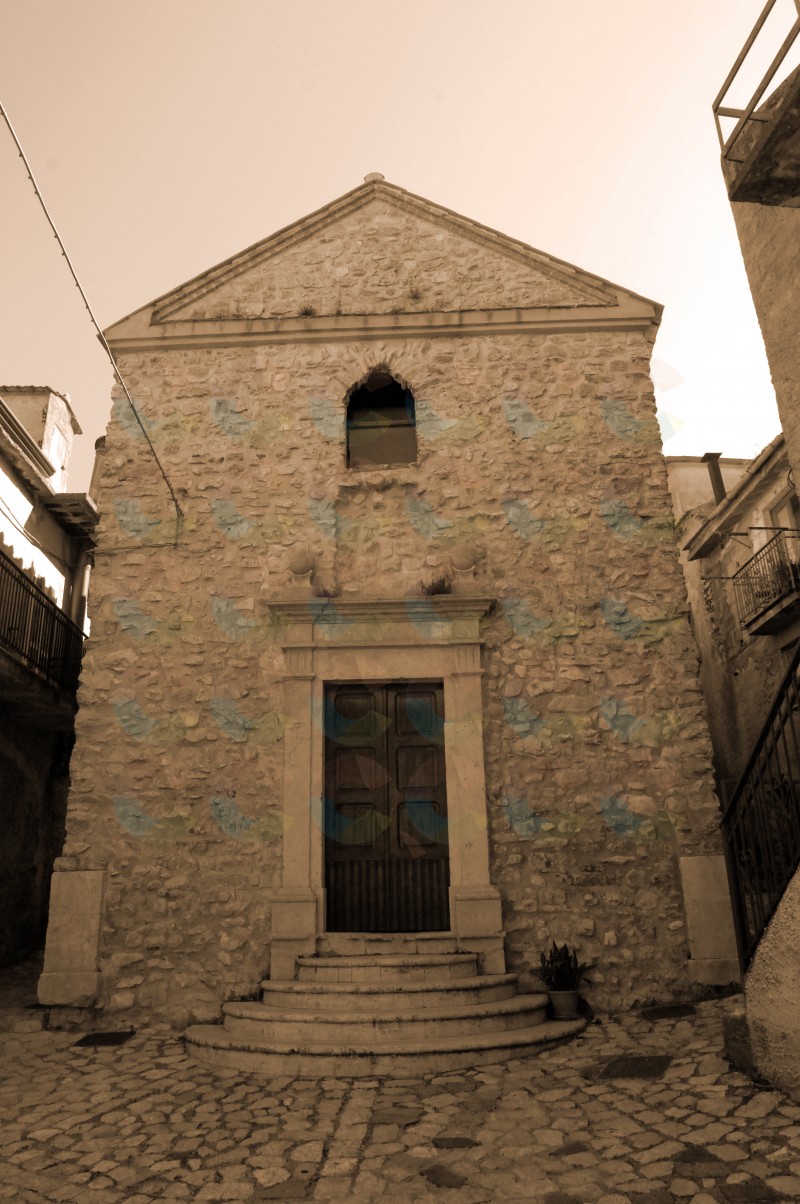 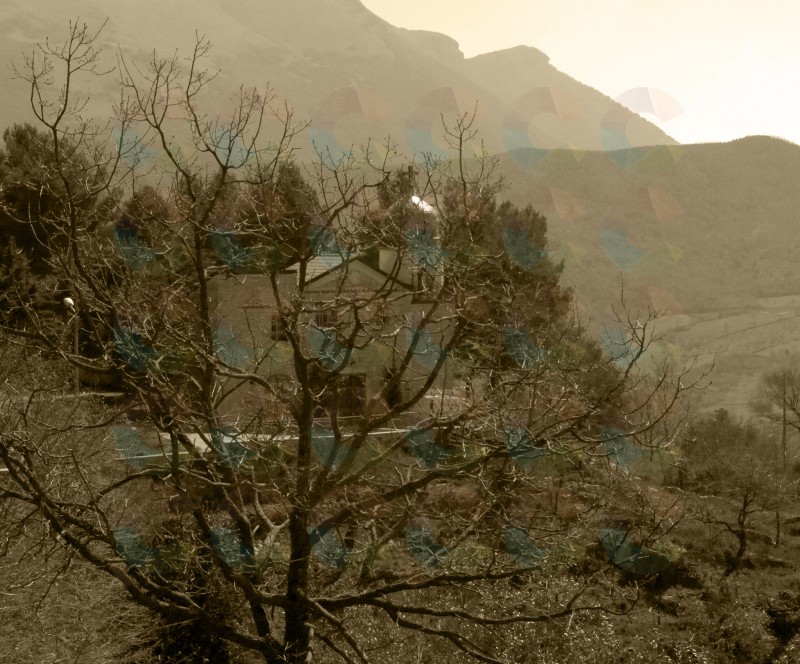 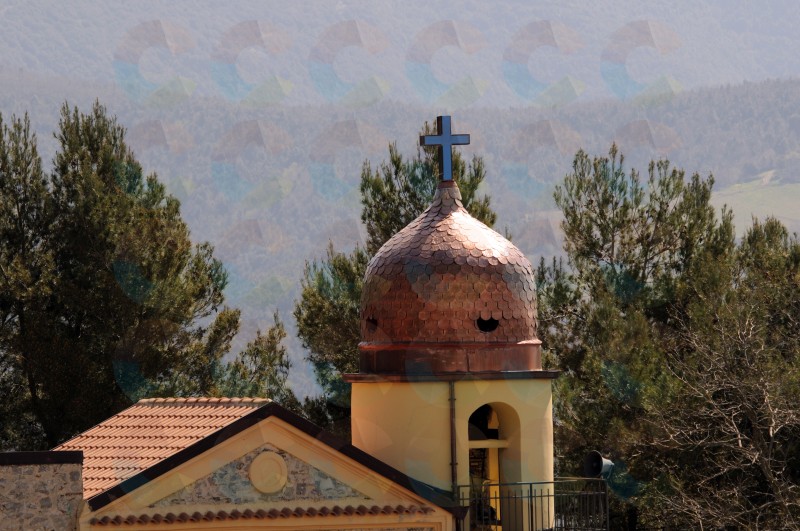 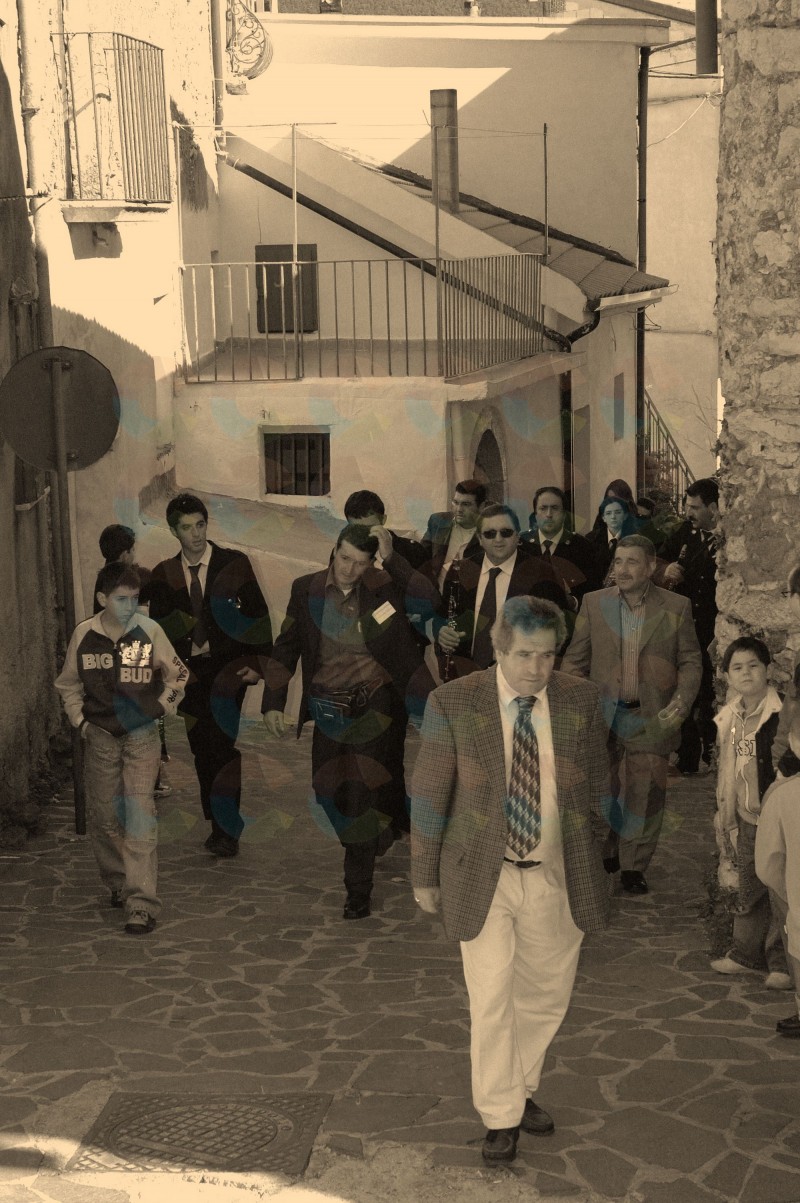 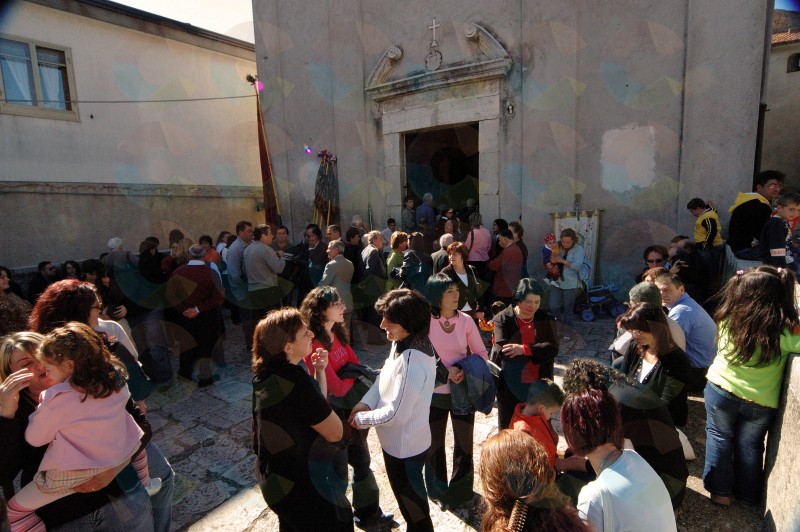 About Trentinara have said all the ancient writers who have written of the Lucania and the Principality, magnifying the impregnable natural position on the plateau of the hill by sheer steep.

As I said elsewhere, in vain every request by Humphrey and William of Altavilla to get from Gisulfo II as he had promised to have it restored to the throne of Salerno, the two Normans, with their armies invaded the territory over the Sele, seizing Trentinara on the hill overlooking the plain of Paestum and the way that, by Monteforte, leads to Magliano. Here you came especially through the forced step of the same name which took possession. The step paved the way of Alento leading to the sea and the foothills to Novi.

By these and other ways, the Normans occupied the whole from Eboli to Sicignano to the sea of Agropoli and to those castles in the territory of San Severino di Camerota, Centola today, whose controversial tenure caused the treacherous death of the brave Guido from Salerno, Count of Policastro and brother of the King of Salerno. The oldest extant document concerning Trentinara is of 1092. It shows that the town had to be quite extensive if Gregorio from Capaccio, son of Pandolfo, Count of Capaccio and Corneto, and his wife Mary, son of Herbert, donated, pro soul, to the church of St. Nicholas of Capaccio, churches held in Trentinara. And that is, the churches of St. Maur, St. John and St. Sylvester, Trentinara out, and the church of Santa Maria, of course with all their dependencies.

About a donation to the Abbey of Cava is then news in 1120. Roberto, said Manic, with his wife Sofia donated to monk and priest of the Abbey, Rossomanno, all that was received as an inheritance from Aillo and Porfida, existing in Trentinara. In a diploma of Count Giordano of 1137 is designated as its guarantor Gregory, son of Gregory, Lord of Capaccio and Trentinara. From a testament of 1156, exemplary for brevity and clarity and important for people selected as executors, it learns «domini Guilielmi de trintinaria » and « figliuolo domnus robbertus de trintinaria ». Presence of such high characters that is explained not only by the position of the ancient castle which dominates the plain of Paestum, especially for the economic position and kin, ancient and acquired by the lords of Trentinara, including the lords of Novi.

In fact, William's aunt, Berta from Capaccio, had married William (I) de Mannia from Novi. During the illness that led to death, the lord of Trentinara, in full possession of his mental faculties and speech, ordered at the presence of the judges Giovanni, Romuald and John, of all his movable and immovable property. He appointed, therefore, his executors Archbishop Romuald of Salerno, Bishop of Celso, the abbot Marino of Cava, his stepfather Alfano of Castellammare of La Bruce (Velia), real chamberlain, Walter said Boccafolle and Guido from Campora.

He left his wife Lolegrima, daughter of the aforesaid chamberlain Alfano, the third part of all his movable and immovable property, wherever situated, and the most prestigious gift that an ancient knight could offer to his wife, his best horse with all its weapons. Of the other two parties in movable assets, upon return to creditors than was their due, Roberto arranged to assign 200 tari to archbishop of Salerno, another 200 to the monastery of St. Benedict of Salerno, and 500 tari to Bishop of Paestum, distributing the remaining liquid. In 1185 Gisulfo of Castellammare of La Bruce (Velia) son of real chamberlain Alfano, confirmed to the Abbey of Cava any property donated to it by Robert of Trentinara and Jordan Corneto.

The confirmation refers to the village of Terricelle that Roberto had given the Abbey. In the same year 1185 is news « Marinus domini castri trentinaria ». In «Catalogus baronum» is news of Guido from Trentinara possessor of three peasants that with the increase meant to prepare a soldier for the great expedition.

In 1247 Pope Innocent IV wrote to the abbot of Cava to procure the assignment of two estates in the Valley of the Crati or in Calabria « dilecto filio Riccardo de Trentinaria », whose father had been stripped of his possessions by the emperor (Federico) and who was living in exile and in economic straits with their brother. F. Campanile says that King Charles I had paid the special qualities of Guido d'Alemagna, lord of Castelnuovo (Cilento), giving over Castelnuovo, the feuds of Senerchia, Lucullano, Trentinara and Campagna. Guido, however, had to be lord of Trentinara for a short period (1267 - 1268) if the logs show an uninterrupted succession of local feudal lords, as the same Riccardo as written in the letter of Pope Innocent. In fact, Richard of Trentinara had to prepare two soldiers to expedition to Romagna.

Of brother Corrado and his property, as its inclusion among the vassals immediately subject to Prince Charles, appointed prince of Salerno, has said in other registries. It's news that Richard Conrad and another brother, Letterio, had been imprisoned as rebels, in the castle of Capaccio. We learn from an order of the king to that castleman to lead to his presence the rebels, while by an order to «stratigoto» of Salerno, we learn of the allocation of their assets to Ugo di Susa, except those of a fourth brother, Guglielmotto of Trentinara, «qui occubuit in Prelio Beneventi». soldier of Trentinara, Filippo is mentioned for having occupied even half of that feud that was of the Curia and for royal assent to the marriage of his son Raone.

The new overlord of Trentinara, Ugo di Susa, escaped some animals to brothers Peter and notary Nicola; the king ordered their return. After the death of this man, without heirs, his feuds Lucullano, Senerchia and Trentinara went to Curia. These feuds were then granted by King to James of Brusone, which had to be delivered. On December 7, 1269 King Charles ordered to «stratigoto» of Salerno, William Garner, to return to the brothers Riccardo, Corrado and Letterio fromTrentinara, seven bushels of wheat and a buffalo tamed. These assets were seized to predicted and remained at Garner.

In the registers it is also news of concealment of 25 fires, and the recovery order of ounces VI and VIII tari and a half. Of 1291 is the order to the executioner of the Principality of tax-exempt countries of Tanagro Valley and of the Tyrrhenian coast that had suffered damage from enemy attacks. Among them Trentinara. After that we find Trentinara granted to Thomas Scillato of Salerno, that is, that part of Trentinara owned by the Curia that James of Brusone had changed for the annual revenue of 24 ounces.

In the same time the village was left without inhabitants fled in the mountains. Probably for that the king granted the tax exemption providing that the population had returned to inhabit the village. In a second time the king, kept in mind that the discomfort persisted, even after the feudal passage, and that each crop had been abandoned by the people sheltered in the mountains, ordered to pay also to Thomas Scillato annual yield of 24 golden ounces, from the month of August.We learn about the rebellion of Trentinara from a letter (27 October 1384) of Queen Margaret, vicar of Charles III of Durazzo (1382 1385) that went to Hungary, where he was killed (1386). In the hope of seeing peace restored in the Kingdom, the Queen forgave sins and gave to the residents who had offended the majesty with excesses of all kinds, provided repented the confiscated property, Capaccio, Agropoli and Trentinara.

From the manuscript of Mandelli is learned that Queen Margaret had donated the estate to Francesco Colella of Trentinara.In Reg. 1423, we learn that the Del Giudice family, as well Roccadaspide, also owned Trentinara. Volpi, in turn, reports from Tutini that Americo Sanseverino «comes Capuatii», already in 1433, had, over Capaccio, Trentinara and 16 other estates in the region.

By purchase of the feud of Montesano by Susanna Caracciolo, mother Artalo of Cardona, Marquise Polisano, we learn that in order to deposit the required 25,000 ducats for the purchase, had to collect d. 4000 by John Gomez to whom she had sold the barony of Trentinara. F. Campanile confirms then that Berardino Rota, as well as lord of Trentinara, was also of Prato.

To him succeeded Antonio.In 1601, however, it is news that the Marquis Arcello had sold Trentinara and Casali (Giungano and Comingenti) to Antonio Caracciolo for d. 28,000. Marino Caracciolo, however, alienated Trentinara with the hamlet of Giungano and rustic feuds of Spennazzo, Reibaldo, Volpe, Delli Mercati, etc. to d. 23,000 to Marcantonio Morra. In 1626 Catherine Helen of Morra sold Trentinara with other hamlets to Pirro Minaddois, Count of Potenza, for d. 32,000. The feud then passed to the family de Angelis who lived in Sorrento. The title of Marquis of Trentinara was granted (4 March 1710) to Leo de Angelis, patrician of Trani (21 July 1739), who was succeeded by Carlo Maria (31 August 1742), who, with his son and successor, Gaetano, was ascribed to the Register of Squares closed.

From Gaetano it passed to Joseph (Naples, July 28, 1809 there, January 11, 1904), which, in the absence of male heirs, succeeded Maria Josefa (Naples, December 17, 1841), wife of noble Ernesto of Goyzneta, the Marquis of Taverna , which, after a favorable opinion of the Commission and of the Heraldic Neapolitan heraldry of the Kingdom, gained legal recognition as the Marquise of Trentinara (R. Open letters, August 26, 1906) and so ascribed to the Golden Book and the List of region .

The de Angelis of Trentinara have grounds for claims to the title of Duke on the surname.Of Trentinara wrote Abbot Pacichelli that placed it «in front of the Sea over Capaccio, and on the peaks of Aspromonte, departs six miles from the ruins of Pantoliano [...] with dependency of hamlets of Giungano and Comingenti» . Gatta says «to the fortress site and the vague prospects, which are discovered by prominent peaks [...] the Maritime beaches Pestane that of their famous islands of Leucosia and Sirenuse much celebrated by 'Poets' . Antonini gives the verses of Rota. Giustiniani noted that documents the village is always named. He places it on a mountain chain called by some, to 38 miles from Salerno.

Then resumes from Marinelli (Manddelli) that it was a city with the hamlets of Giungano and Convingenti and with a thousand inhabitants, all farmers and shepherds. Galanti has 948 inhabitants, Alfano 980, Bozza 1638. From Giustiniani is learned the population from 1532 to 1669.

Feast of Our Lady of Loreto

Feast of St. Irene of Thessalonica

Feast of bread and country life