PAISTOS, Poseidonia, Poseidonias, Paiston, Posidonia, Pesto, Paestum, first in Enotria, then in Lucania and in region III of Augustus. Seat of diocese until it was moved to Capaccio, becoming fraction (Km. 14). From Salerno Km. 38. 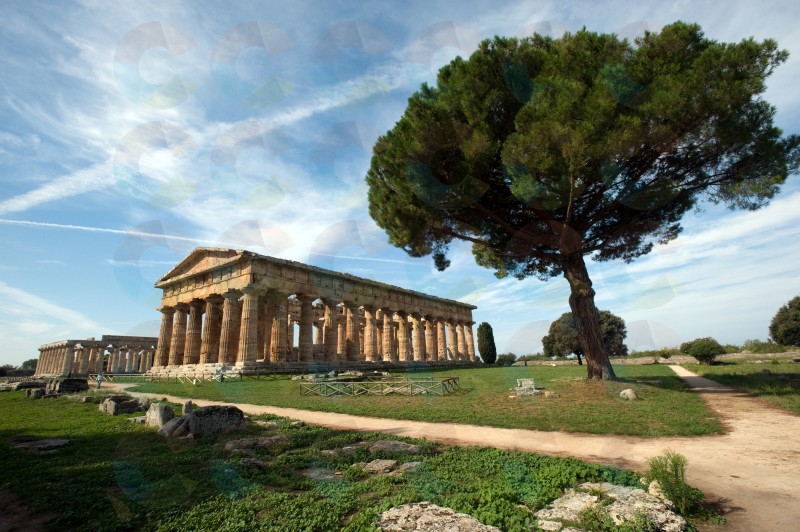 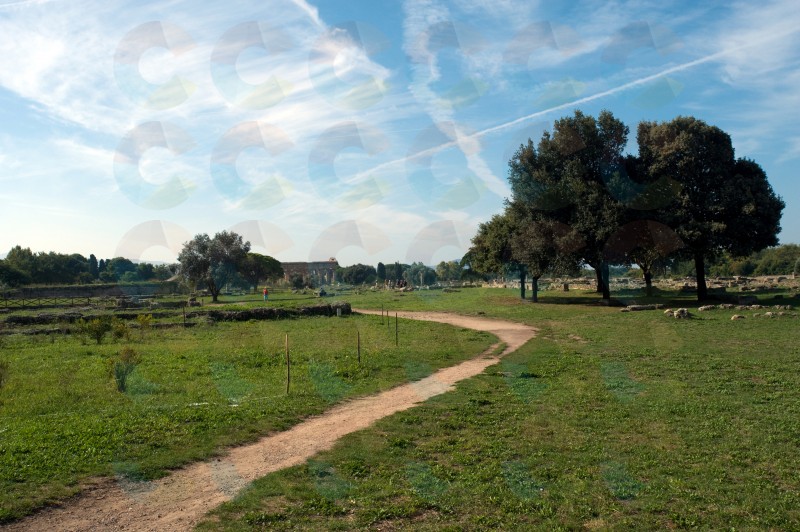 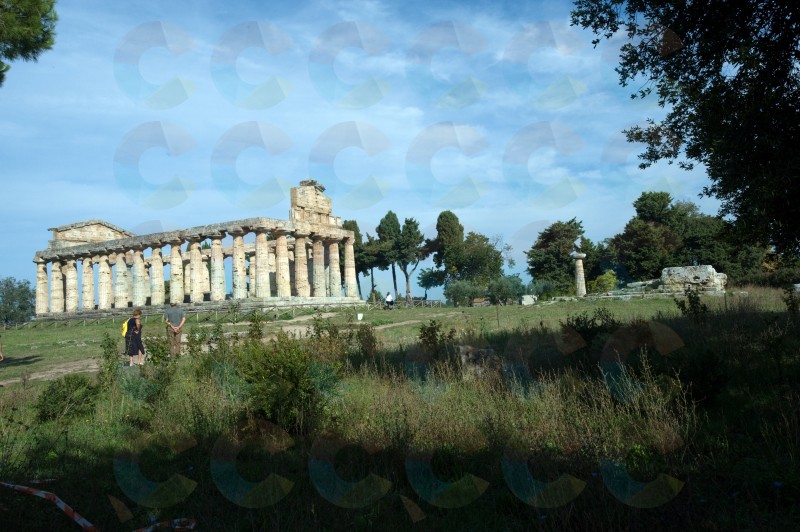 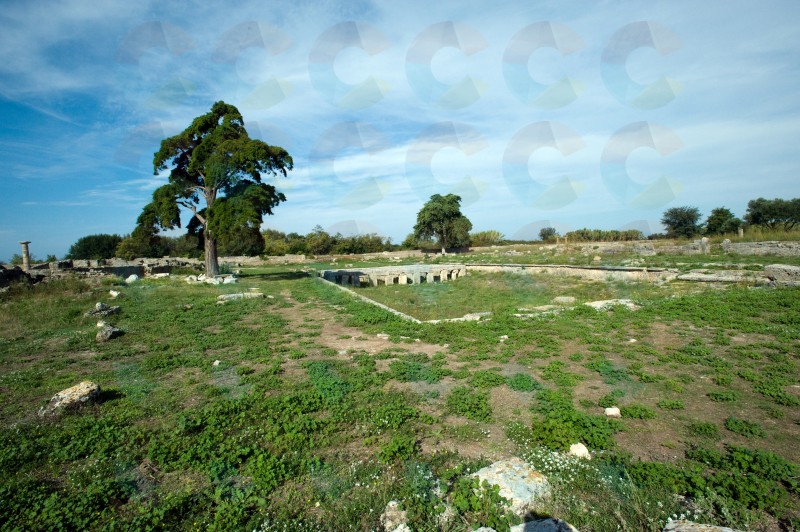 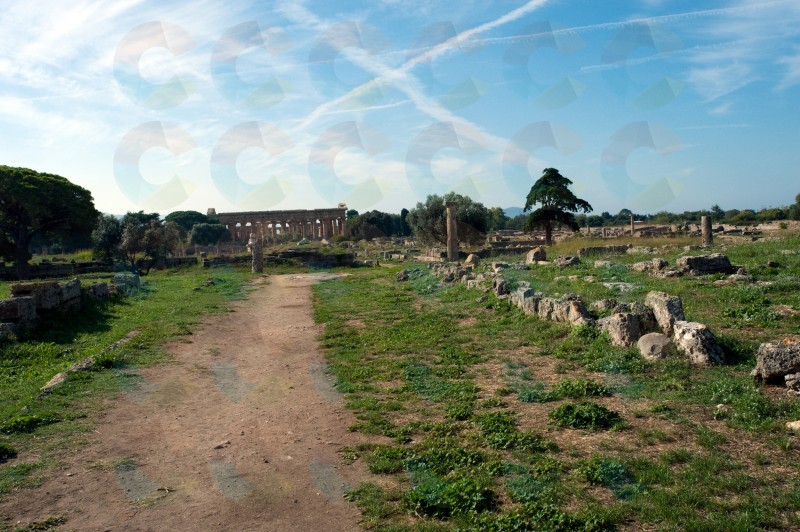 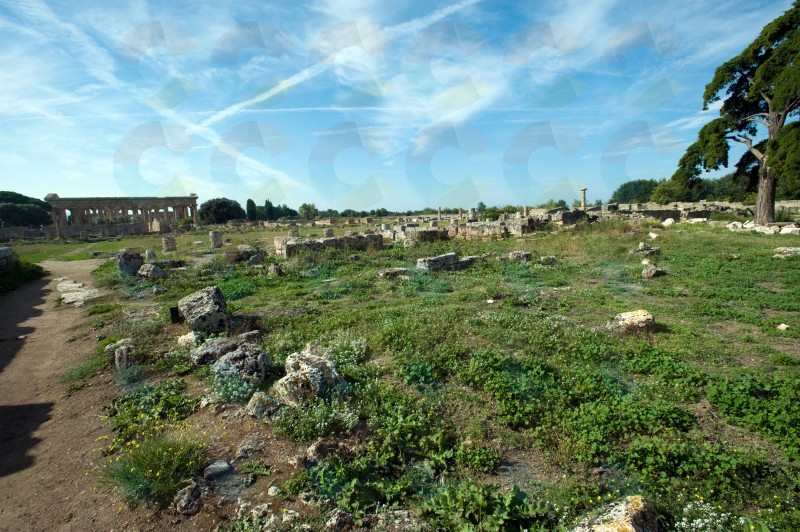 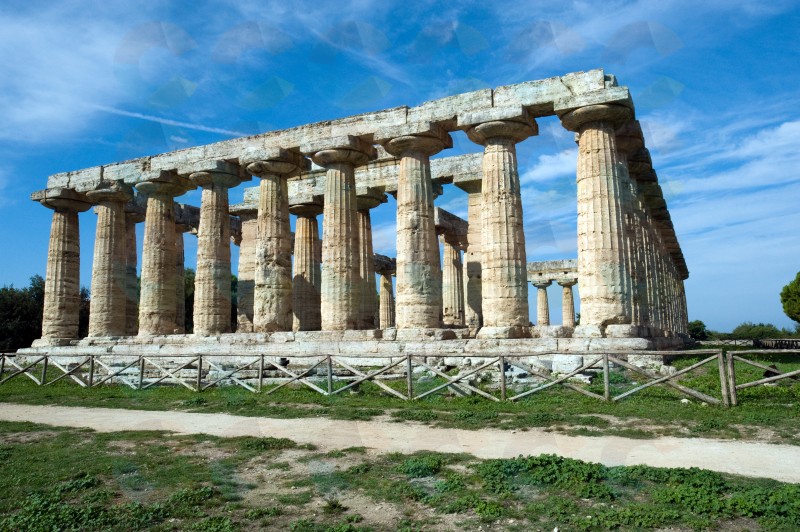 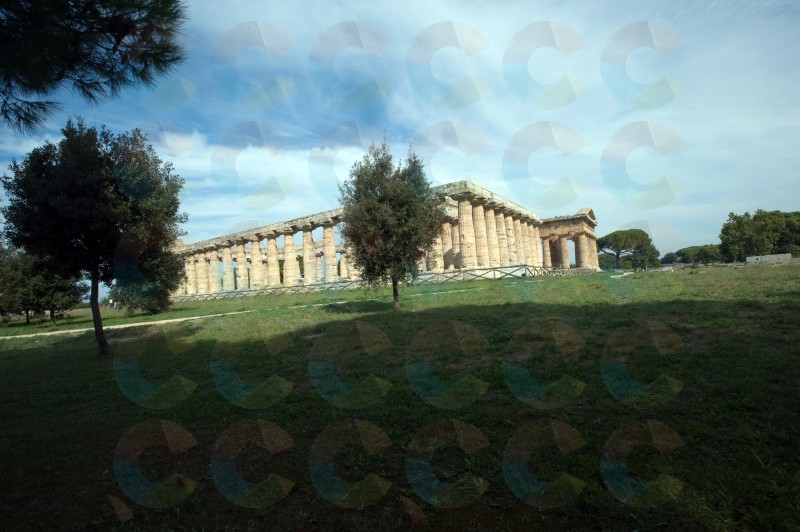 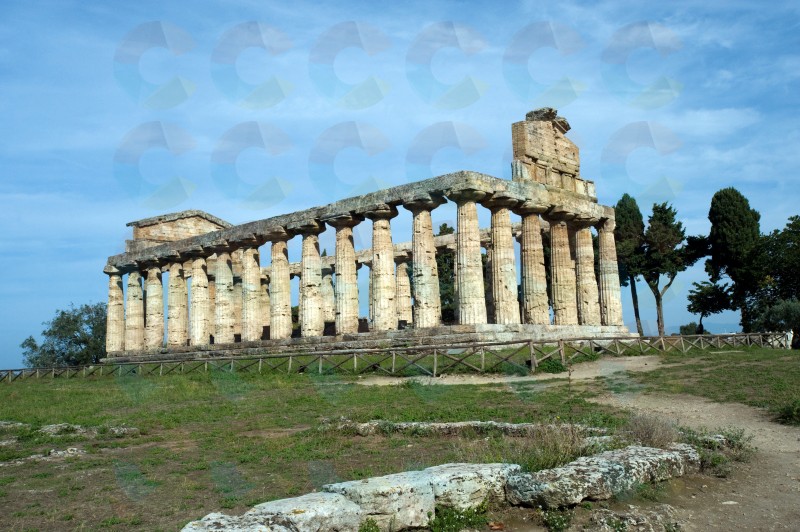 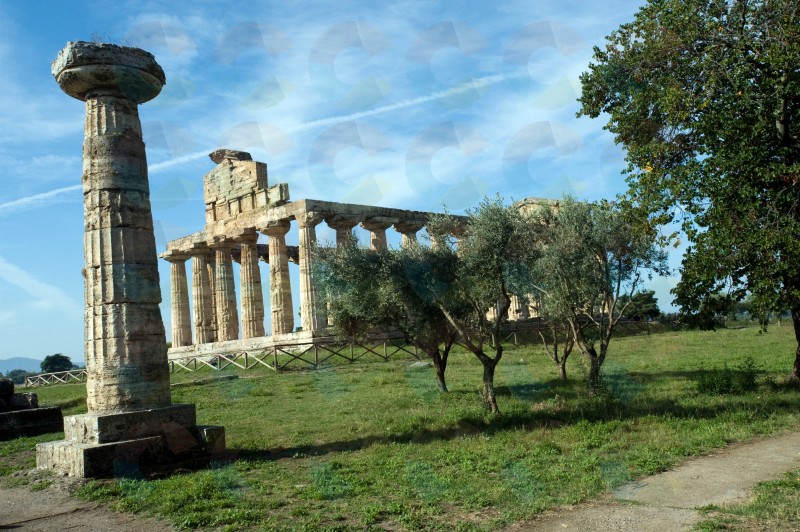 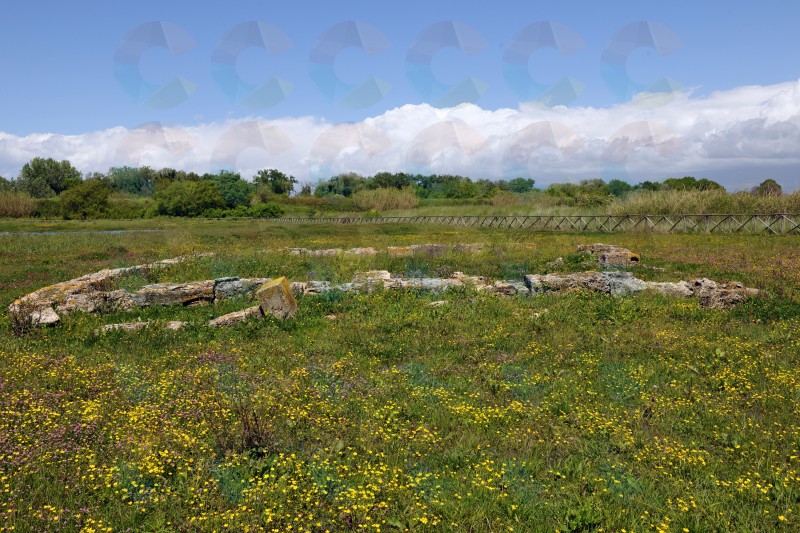 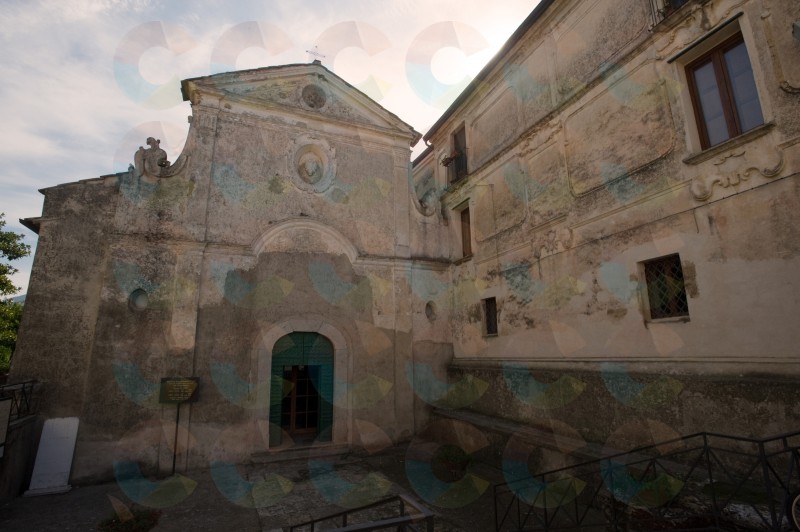 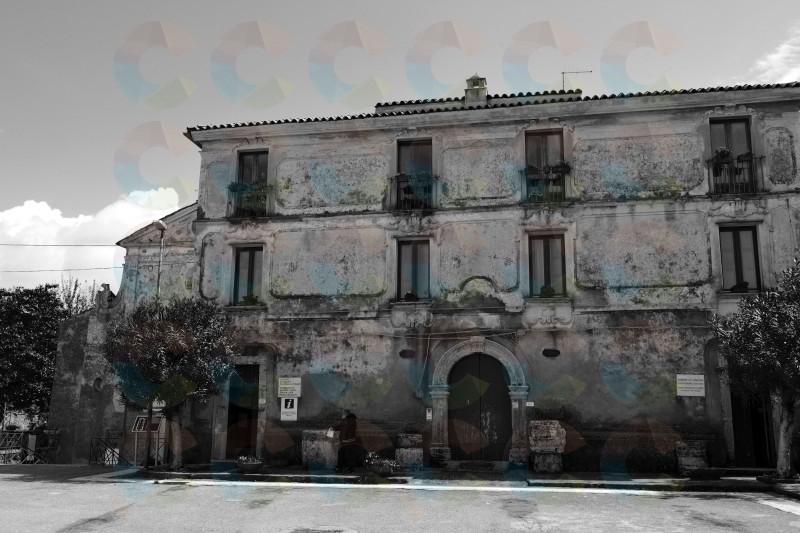 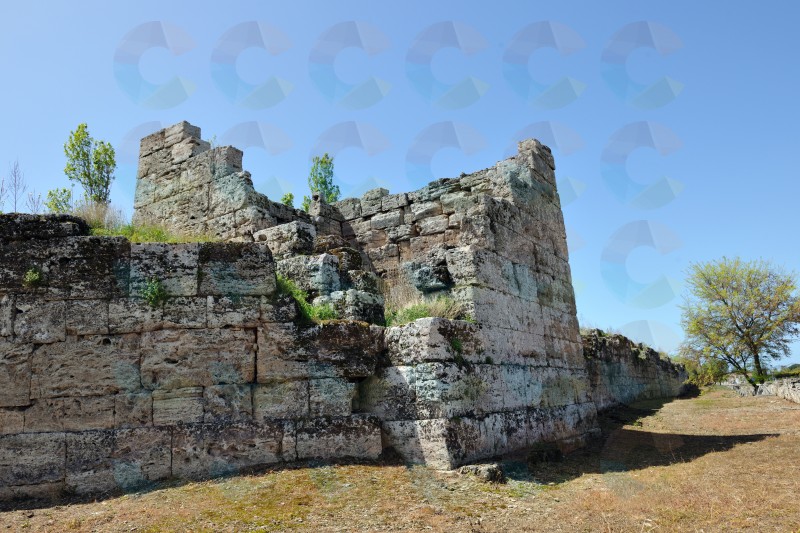 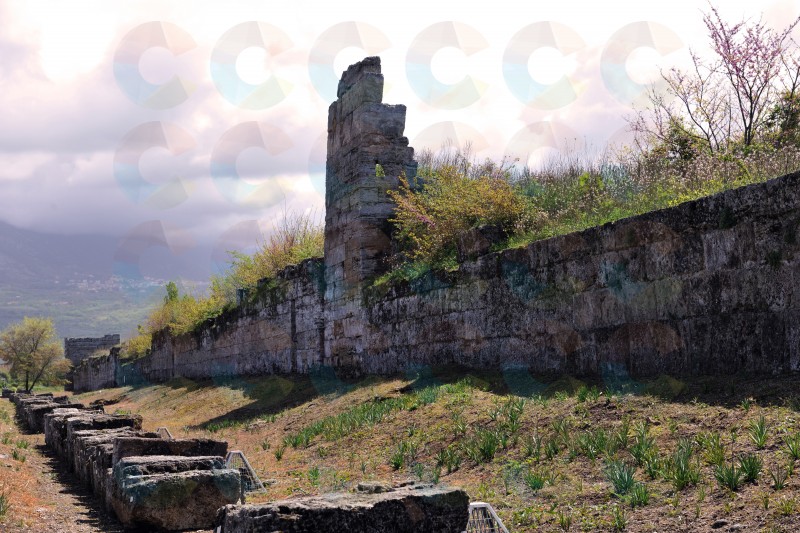 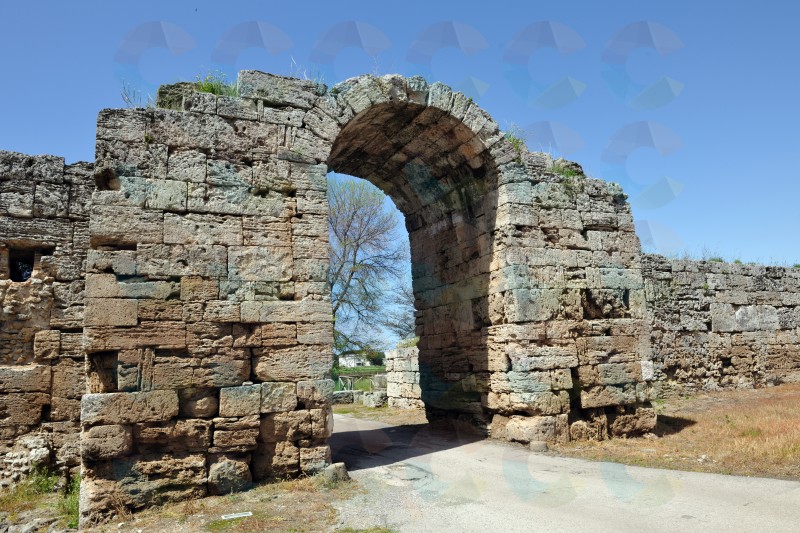 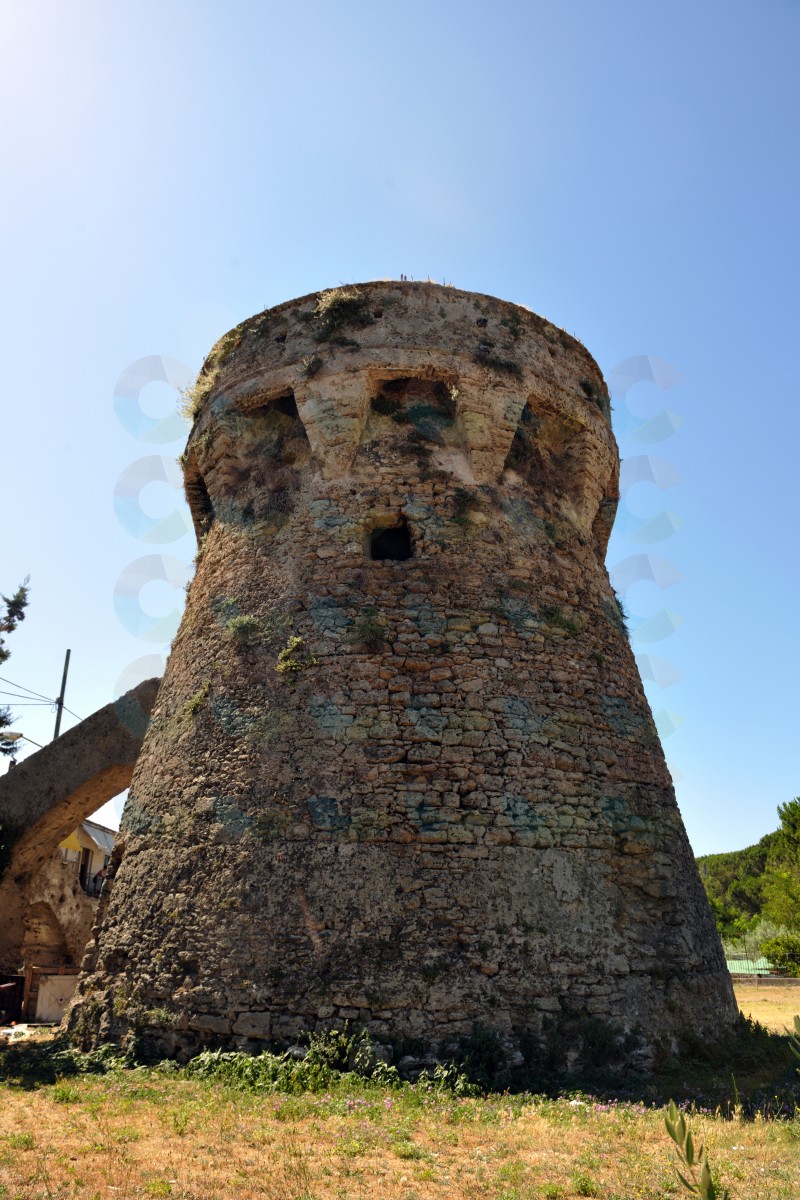 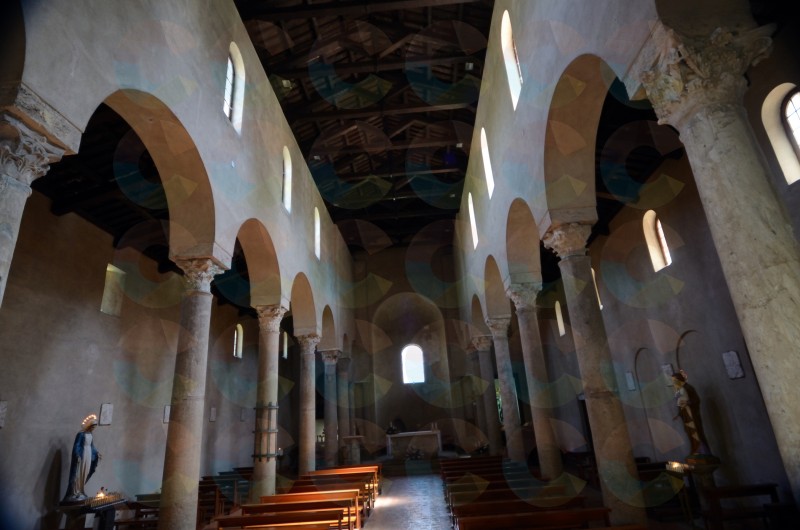 INSIDE THE TEMPLE OF NEPTUNE


Already in ancient times plain of Sele had been touched bypeople from the Aegean-Anatolian, as shown in the necropolis of Gaudos (1500 meters to north of the walls: civilizations of Gaudos).
Later at the mouth ofthat river settled part of those daring sailors-merchants Aegeanthat, regardless of the dangers, hardships and adversity, had gone down to theLazio and Etruria to seek, to the exhaustion of the copper, the irreplaceable iron.
At the mouth of Silaro they built a temple,then so famous, dedicating it, as was the custom, the deity homeland:Argive Hera.

At about 600 meters from the sea, and on a terrace usedsince from the Neolithic age because dominant the wide expanse of the sea andthe vast surrounding swamp, lived a small group of indigenous (Pai-Pais-Paistos), with which the new arrivals quickly coalesced.

For the little information we have received various hypotheses are onevolution of the town to the city: and that is, if for the arrival of otherpeople rhodium argoliche, only sybaritic, or the arrival of that group of Trezeni that Aristotle reminds expelled from Sybaris, so thispaid for the crime with one of the most memorable of destructionall time (The victory went to Crotone, despite the lower numberof its forces and the city of Sybaris was destroyed in 510 BC, while theCrati river was diverted to cover its ruins).

That bank travertine is always surrounded by the waters of a river(Salty, Capodifiume) known since ancient times for its quality: precisely its waters are rich in calcium carbonateand sodium chloride, which originated that platform of porouslimestone from which they drew the blocks for the walls, for the different buildings,for entablatures and columns of the temples. Not only that, the bank formeda perfect complex seismic who managed to safeguardtemples by the succession of motions and earthquakes along strategic islandcally safe, and, moreover, quite healthy, in that sea of purchasetrini, fomite of marsh miasma.In plain of Paestum continued to flock people of Sybaristhat understood the importance of Poseidon, which bridgeheadthe longitudinal artery teacher internal Ionian-Tyrrhenian roadhad built for the inevitable commercial activities that developed towards Lazio and Etruria.
What is certain is that the relationship betweenthe two cities were increasingly close if in 511-510 BC, followingsybaritic diaspora, for the lost war against Crotone, the things made for refugees were not confined to sterile as appreciableaffective manifestations: the city of roses blooming in the year twicedid more.

Posidonia revolutionized its monetary systemincreasing the weight of his stater and dividing it according to theAchaean system: made an impact even with the episemon sybariticon his coins. In Posidonia was made the most timely and perfect monetary conversion of antiquity, especially for reflections in international financial world. The emission ofthe new currency, in fact, meant the transfer in the city Tyrrhenian (male figure on the right) of high finance sybaritic (bull on the other side),made aware the various economic operators of Ionia and other markets,especially the exchange of Piraeus, of the validity of the previous sybaritic empire, of which money from Paestum was sure guarantee.Of that is sure testimony in the architectural remains.

There are no documents in Paestum before to '600 BC.
The constructionof two small temples dating to the first half of that century and thesecond (560-550) the completion of those architectural prodigywhich is the so-called Basilica and the end Athenaion (thecalled Ceres). Indeed the massive arrival of the exiles from Sybarisis seen a striking testimony in the tomb of the legendaryfounder of Sybaris. Then, in fifty years Posidonia built strong walls and the temple of Hera (the so-said Neptune, 450 BC).Then first splendor of city (about a century) began to declineespecially with the occupation of Lucanis (420-410 BC) which lasted until273 BC, when Rome withdrew Paestum to that domination.

With Rome Paestum had close ties: in Paestum andVelia were built many ships of the Roman fleets. So Romeallowed that Paestum and Velia continue to coin money, VeliaFirst, Paestum until the time of Tiberius. After a certain revival inthe first half of the imperial Paestum, like Velia, continueddecadence. Just around one of its famous templesto get together the last inhabitants of the beautiful city, making of Athenaion a Christian church, then sort isolated (cathedral pestana)right in front of it and dedicated to the Virgin (then the SS. An-nunziata). In old Capaccio had gathered the people who escaped thesuccession of raids of Saracens.

With the population climbed Mount Calpazio even bishops,which, however, continued to say pestani, as we have seen, even in old Longobard age.In the Archive of the Abbey of Cava there are some documents about Paestum. The oldest is a novel of 1041. With itTruppoaldo, scribe of the Palace (seat of longobard government) and Abbot ofthe church of St. Maximus of Salerno founded by the principles, grants tothe cleric John, son of Bonoaldo Conza, and John, son of the monkof Corvo, the right to build two mills in the propertythat «ecclesie abet in locum Pestum, ubi ad sanctum basili dicitur »at the expense of the church by the end of May, with an obligation to paythe same church from September next, every yeara certain quantity of cereals.

Truppoaldo granted to build another mill under the same conditions. Of 1130 is a diplomaof Todino, son of Sir Gregory of Capaccio and nephew of GuaimarioIV, with whom he gives, after his death, a land site «Foris hacCivitate (Salerno) in loco pesto, quod proprie dalinora dicitur.»
In the absence of efficient settlements is not news of local lords.The plain always belonged to the feudal lords who ruled fromCastle of Capaccio, both in the Longobard period that Norman and Swabian,as in later.

Feast of Our Lady of Announciation

Paestum Festival: to the shadows of the temples

From beginnings of august to 20th of the month